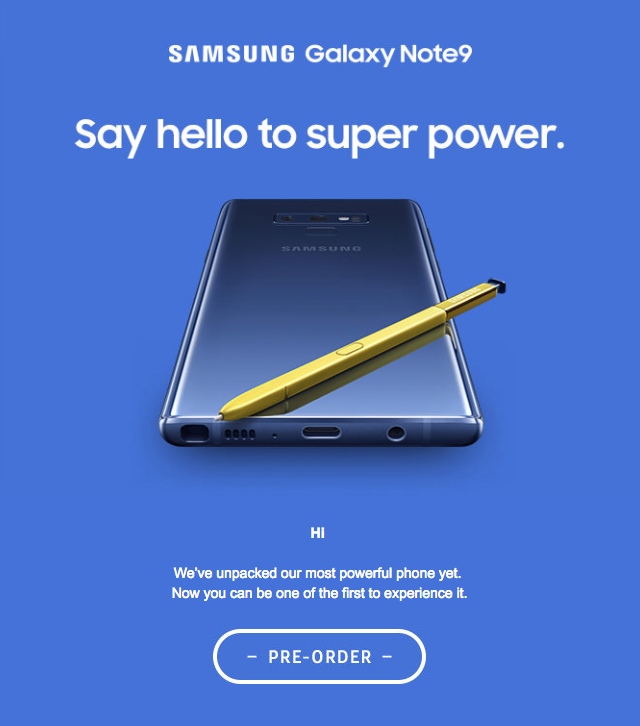 We are not sure, if it was intentional or by mistake, but Samsung post an image of Galaxy Note 9 on its website as noticed by leaker Evan Blass, and was quickly removed. Mashable managed to obtain the image from a cached version of the site; check it out in its entirety below. It appears that the image is part of a pre-order offer for subscribers to Samsung’s New Zealand newsletter. While the phone is not yet available for pre-order.

The tech giant Samsung launched a sale page on its official website. It allows you to reserve your place in line for pre-ordering the Galaxy Note 9. Image displays only the back side of the phone but still we can tell few things about it. The smart phone surely has S-Pen and its slot, the USB-C connector, and a headphone jack. Dual camera lense, flash and fingerprint sensor is quite visible as well.

The image confirms the rumors that suggest Note 9’s design similarity to its predecessor Note 8. The only difference so far, is the position of finger print sensor being beneath the cameras. Meanwhile, Samsung also posted another teaser for the Note 9, which goes through the history of the Note brand. The short video (above) tells us very little but it’s notable as Samsung skips the Note 7 entirely — that’s the one that tended to burst into flames on occasion. An earlier teaser promised a more powerful battery; hopefully, there will be some news left to share when this thing officially launches on August 9.

There are no surprises here, but here are the few specifications: 6.4-inch Super AMOLED display, dual 12-megapixel rear camera, coupled with an 8-megapixel front camera. The phone will have a much bigger battery of 4,000mAh, and there will be a variant with 128GB of memory.

Love the looks of the Galaxy Note 9