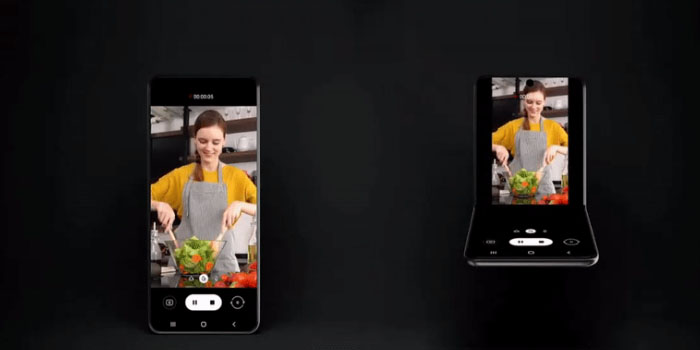 Are you ready for the Samsung new ‘clamshell’ foldable smartphone?

During the One UI 2 section of the Samsung Developer Conference 2019 Opening Keynote, the Korean Tech giant Samsung showed off a new fordable concept render. Compared to the first-generation foldable device that folds like a book, this one has a tall screen folds in half to become a square-shaped object that you pocket.

A render from Samsung shows a tall screen that’s something similar to what Sony and Essential are planning for a foldable device. Bezels are almost non-existent, while there’s even a hole punch front-facing selfie camera centered up top. The full experience of this Samsung foldable flip phone is quite straightforward with the company showing a standard home screen and camera app. In the latter example, one use case for this form factor is folding the screen so there’s a 90-degree angle. The viewfinder moves to the top half, while app-specific controls remain at the bottom. This provides a natural stand for your device instead of having to hold it up while recording.

This 24-second video teased by the company is simply titled a “New Form Factor for Foldable Smartphones.” Bloomberg earlier this year leaked that Samsung’s second generation of a foldable device for early 2020 would have a 6.7-inch display that creases horizontally into a “compact square.” Hopefully, the actual product is not too far off from this preview, especially in regard to the minimal bezels. As promised at SDC last year, Samsung will continue to experiment with a range of new form factors in the foldable segment. And at SDC19, Samsung invited developers and users alike to join the exploration of exciting new use cases and user experiences.